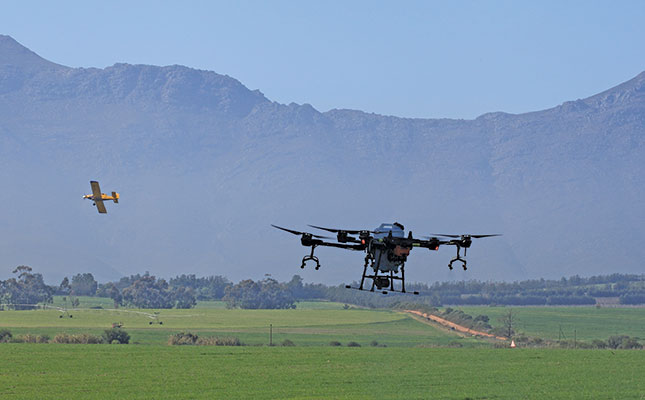 To Tim Wise, whose sugar cane-growing family had always battled with the quality of crop spraying delivered by aeroplane, drones seemed to be a workable alternative. This led to research into drone technology in 2016, and the subsequent creation of Precision Agricultural Systems. The company has since been the driving force in having crop-spraying drones approved for commercial use in South Africa.

Sugar cane responds well to a ripening spray at about eight weeks before harvest. But Tim Wise, who grew up on a sugar cane farm in KwaZulu-Natal (KZN), remembers how his family struggled with uneven and inaccurate delivery of this spray by crop-spraying aircraft. Sugar cane in South Africa is usually cultivated on hilly terrain with steep gradients, and the average field size is small, at around 6ha. These factors, combined with coastal winds and obstacles such as electricity pylons, natural bush lines and cell phone towers, make low-level flying difficult and dangerous.

To make matters worse, the ripening spray is often essentially a low-concentrate herbicide, so it is crucial to prevent spray from drifting onto other crops or neighbouring cane fields at a different growth phase. Together, all these factors frequently result in inaccurate application by aeroplane, and hence failure to achieve full and even coverage over the crops requiring ripening. The problem led a group of KZN farmers to fund a world tour in 2016 to investigate drone technology as an alternative to aircraft for crop spraying.

“In China, we met with DJI, the largest manufacturer of consumer drones in the world,” recalls Wise. “Initially, we were disappointed by the lack of functionality and efficiency of their first-version drones, as these had been developed largely to service the local subsistence rice industry. They were designed to work on small, flat, symmetrical fields.”

DJI then asked the farmers to provide the functionality required to unlock the sugar cane-spraying market in South Africa. A trained IT business analyst, Wise set to work upon his return.

“I drafted and sent a specification document for a drone that would be capable of spraying effectively in our challenging KZN conditions. I didn’t expect to have an influence on the research and development (R&D) of a major company like DJI, so at that stage my company, Precision Agricultural Systems (PACSys), was still planning on developing and building our own spray drones to our specifications.

“I was stunned, therefore, when DJI invited us back to China only six months later and presented us with their newly designed spray drone, incorporating most of the functionality we’d proposed.”

This, he says, was when he realised it made sense to negotiate the DJI Agriculture distribution agency for Southern Africa. Wise says the drones in 2016 had a payload of 10ℓ and batteries with an operational lifespan of 200 charging cycles. Most pesticide products registered for aerial application in South Africa have a 30ℓ/ha dosage rate.

This meant three battery-charging cycles/ha, resulting in only 70ha being covered in the lifetime of the battery. Drone spraying was therefore slow and expensive. However, the cost of traditional aircraft application on KZN sugar cane fields is also expensive, and drones could significantly improve spraying accuracy. This ultimately means a greater return on investment for the grower at a similar cost of between R400/ha and R500/ha.

Drone spraying technology, however, has improved markedly since 2016. The latest model, the DJI Agras T30, has a 30ℓ payload and hugely improved battery efficiency. An operator can now get about 1 000ha of spraying from a battery in its lifetime. In addition, drone functionality, speed, effective spraying width and flow rates have all been improved, effectively tripling drone spraying efficiency.

“We’re now at a point where the drones can compete viably with traditional aeroplanes for ‘mega’ crops such as maize, wheat and timber,” says Wise.

When spraying large areas in easier terrain at label-registered aerial rates, the Agras T30 can operate at a cost of between R200/ ha and R300/ha. In the Western Cape, winter grains can be done even more cheaply, as this spraying is required outside of the typical spring and summer spraying seasons and is thus seen by aerial contractors as an opportunity to supplement core income generated elsewhere.

Wise explains that because there was no precedent at the time, it took almost two years for the first commercial drone spraying operator to be approved by the South African Civil Aviation Authority (SACAA) in late 2019. Since then, at least three more operators have been approved and more are in the process of approval. (Commercial drones are subject to similar regulations as commercial aircaft, and drone pilots need to be licensed and registered by both the SACAA and the Department of Agriculture, Land Reform and Rural Development.)

Scaling up and unlocking growth

“The next phase in the drone spraying revolution is to gain SACAA approval for ‘swarming’, where one pilot has the ability to control up to three spraying drones simultaneously,” explains Wise.

“The DJI Agras drones are developed with highly advanced safety systems, enabling seamless and perfectly safe use of this advanced function. If approved by the SACAA, swarming will further enhance operational efficiency and ultimately scalability on the market.” 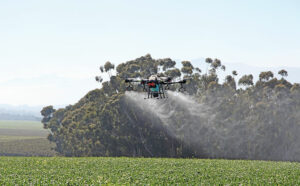 Drone rotors force the crop spray downwards towards the plants.

Many pesticide manufacturers were initially skeptical of the use of this technology for the effective application of their products; there wasn’t enough historical trial data tosupport the concept. Fast-forward four years, and PACSys now consults with several multinational pesticide manufacturers on an R&D basis, often with surprising results.

“For example, a recent insecticide trial on mature potatoes in the Northern Cape showed that the drone spraying at 30ℓ/ha achieved superior canopy penetration than that achieved by traditional tractor-boom application at 200ℓ/ha.”

Earlier this year, Wise and his team were contracted by the South African Sugarcane Research Institute to assist with extensive sugar cane ripening trials in small-scale grower (SSG) regions.

“The SSGs, being mostly remotely located and having smaller farms, are often starved of access to quality aerial spraying of their crops, and ultimately their ability to optimise income suffers as a result.”

Drones, he adds, have the potential to unlock real economic empowerment in the SSG communities, not only by improving crop quality, but also through skills development and job creation, with aerial spraying businesses being established in the communities to service their own spraying requirements. Drones offer other advantages over aeroplanes too. “Due to the nozzles being directly below the rotors, the strong downdraught results in the spray being more drift-resistant, whilst achieving superior insecticide and fungicide canopy penetration.”
Wise says the new drones are being developed with precision orchard applications in mind.

Wise says that macadamia orchards are being developed on many sugar cane farms due to the similar climatic needs of both crops and the superior return on investment of macadamias. The latter, however, require more use of machinery than does sugar cane, and the steep slopes in KZN often make establishment of orchards uneconomical. PACSys is therefore carrying out a trial to establish whether precision agricultural technologies hold the key to optimising macadamia production on this type of terrain. If successful, this would have the potential to increase both the productivity and real-estate value of KZN farms with steeper terrain, says Wise.

The rest of Africa also represents a fertile market for spray drones. The latest models may be too expensive for individual subsistence farmers to consider, but there is certainly a market for the establishment of drone spraying contractors.

Larger multinational agricultural companies such as Illovo and Tongaat Hulett, who have plantations in various Southern African Development Community countries, are beginning to integrate these technologies into their operations. PACSys is often offered exclusive distribution agencies for other drone brands. However, Wise says they are not looking any further than DJI at this stage. He says DJI’s R&D budget and commitment to agriculture, the availability of support and parts, the quality of its products and the superiority of its spraying are unparalleled.

“We urge farmers to do their homework on drone contractors prior to any applications; [make sure] they’re legal and properly trained and qualified, and [look] for a reputable track record with references.”